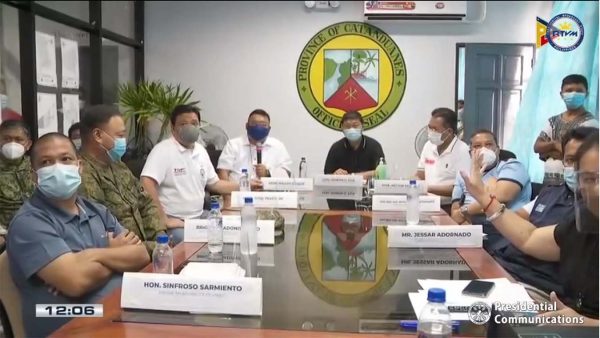 Part of this assistance from the national government are 60 tons of relief goods and supplies including bottled drinking water that were carried by the Philippine Coast Guardâs BRP Gabriela Silang. These relief items will be distributed to the severely affected families in Virac, Catanduanes.

For farmers who were affected by the supertyphoon, the Department of Agriculture (DA), through the Philippine Crop Insurance Corporation (PCIC), has allotted P592, 432, 000 as indemnification fund for 32,761 farmers in the Bicol region whose insured crops were damaged by super typhoon Rolly. According to the DA, PCIC-insured farmers and fishers in the Bicol region will receive insurance claims ranging from P10, 000 to P15,000 for their crops, farm equipment, fishing boats and gears damaged by the typhoon.

To help affected families with their housing needs, PAGIBIG Fund has a calamity loan program where all eligible members can make a loan up to 80 percent of their total PAGIBIG Regular Savings.

According to PAGIBIG, the calamity loan can be availed within 90 days from the declaration of a state of calamity by an affected area. It can be payable within 24 months wherein the first payment is deferred and initial payment can be made on the third month after the release of the loan.

Meanwhile, to help facilitate the distribution of relief goods and the arrival of government personnel to provide services, as well as aid organizations that will conduct relief operations, clearing of roads need to be done immediately.

Catanduanes Governor Joseph Cua reported that typhoon Rolly affected 35, 222 families or 142, 478 individuals in the province. There were 7, 814 displaced individuals in evacuation centers and some 45, 886 in private houses. Governor Cua said that although 6 persons died and 1 is still missing due to typhoon Rolly, he is thankful that preemptive evacuations minimized the number of would-be casualties.

With all the damages and needs of affected areas, Department of Budget and Management Secretary Wendel Avisado assured local government units (LGUs) that they can access some government agenciesâ quick response funds. However, Sec. Avisado said that these quick response funds cannot be released directly to LGUs and that the direct requests should come from the Office of the Civil Defense.