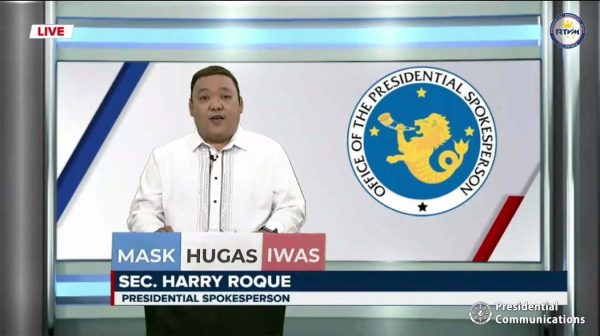 Presidential Spokesperson Secretary Harry Roque Jr. reiterated the importance of enhanced surveillance to detect the new variant of COVID-19 in the country stressing the important role of local government units.

Aside from this, the recommendation of Dr. Jaime Montoya of the Department of Science and Technology-Philippine Council for Health Research and Development to strengthen genomics surveillance was also approved by President Duterte.

Accordingly, several measures were also approved to avoid the spread of the new coronavirus variant in the country, including the proposal from Roque himself to extend for another two weeks the ban on travelers from the United Kingdom, which was supposed to end on December 31, 2020.

As part of the approved recommendations to the President, all travelers who will come from Hong Kong, Singapore, Australia, and other countries where the new variant of COVID-19 have been reported, will have to undergo a strict 14-day mandatory quarantine. There will also be travel restrictions to countries where there are reported local transmissions of the new COVID-19 strain.

In the same meeting, the President also approved the recommendation to send all specimens that have tested positive from travelers from the UK to the Philippine Genome Center, Research Institute for Tropical Medicine, and University of the Philippines National Institutes for Health for genome sequencing,â said Roque.
Also approved was the recommendation of Justice Secretary Menardo Guevara to fast-track the issuance of Implementing Rules and Regulations of Executive Order No. 122 that will strengthen border control through an Advanced Passenger Information System.

Because of the possible threat of the new strain of COVID-19, President Duterte cancelled the implementation of pilot face-to-face classes scheduled in January 2021. ### OPS-PCOO