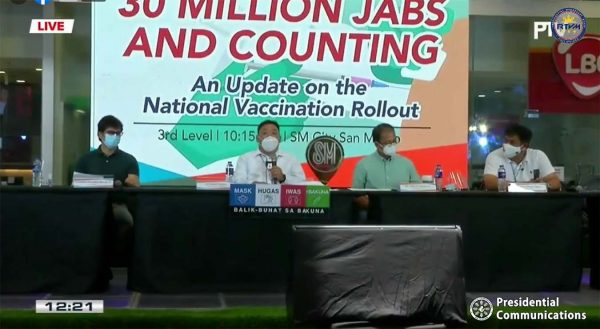 The Philippines reached a new milestone in its vaccination program as the country records more than 30 million vaccines administered at 30,389,160 vaccine doses, as of August 22, 2021 data from the National COVID-19 Vaccination Dashboard.

From the total number of vaccine doses administered, 17,258,675 individuals have been jabbed with a first dose of a COVID-19 vaccine, while 13,130,485 individuals are now fully vaccinated, said Presidential Spokesperson Secretary Harry Roque Jr. during the press briefing that ensued after the â30M Jabs and Countingâ event held on August 23, 2021 at SM City in San Mateo, Rizal.

The Palace official also noted the delivery on August 21 of another 1 million doses of Sinovac vaccines purchased by the national government, and the 582,500 doses of AstraZeneca vaccines delivered on August 20, which was procured by local government units (LGUs) and the private sector.

The stable supply of vaccines has been credited by LGUs as a factor in their continued administration of vaccines to their constituents and those from adjacent provinces.

In the same press briefing, Metropolitan Manila Development Authority (MMDA) Chairperson Benjamin âBenhurâ Abalos Jr. reported that of the 14 million population of the National Capital Region (NCR), of which 70 percent is 9,800,000, 75 percent of the eligible population or 7,350,611 have already received a first dose of a COVID-19 vaccine, while 43.5 percent or 4,262,546 are already fully vaccinated.

Chair Abalos also mentioned that among the most vulnerable sector, 92 percent (927,506) of those in the A2 Priority Group or the senior citizens have received a first dose of a COVID-19 vaccine, while 78 percent (788,973) are now fully vaccinated. For those belonging to the A3 Priority Group or those with comorbidities, Chair Abalos said that 57 percent (1,857,196) have been jabbed with a first dose, while 41 percent (1,375,352) are completely vaccinated.

The Palace spokesperson added that for the NCR, the LGUs that have completed 50 percent going to 70 percent of their target population can already start vaccinating those from adjacent provinces like Rizal, Laguna, and Cavite.

On vaccinating people from nearby provinces in the NCR, MMDA General Manager (GM) Undersecretary Jose Arturo âJojoâ Garcia affirmed the commitment of NCR LGUs to assist, ensuring that there will be a process to follow including uniformed registration of vaccinees and the use of QR codes.

Meanwhile, National Task Force Against COVID-19 (NTF) Chief Implementer and Vaccine Czar Secretary Carlito Galvez Jr. assured that with the continuous delivery of vaccines, the commitment to supply 4 million vaccines to the NCR plus additional 2.5 million vaccine doses to cover other priority regions will be fulfilled.

Secretary Galvez said that with the steady supply of vaccines for the NCR Plus Eight areas that were initially identified as priority areas for vaccination, vaccines can now be equitably distributed as well to provinces to shorten the gap between different regions in terms of vaccine supply. Galvez added that the country can expect some 20 to 25 million vaccine doses in September 2021.

Mateo, in his opening remarks during the event, assured the continued support of SM Supermalls in the governmentâs vaccination initiatives by serving as vaccination site. Mateo said that over 2.5 million jabs have been administered to date in 69 SM malls from North Luzon to Mindanao. ### OPS