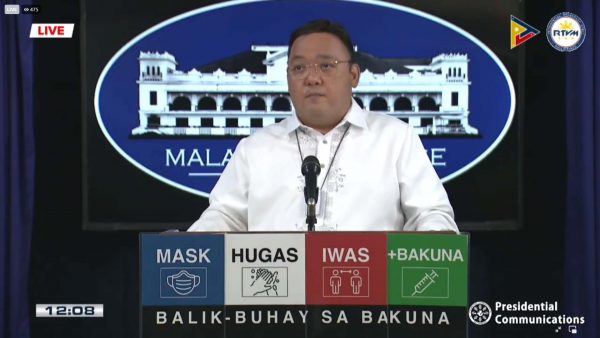 In the continued conduct of the countryâs national vaccination program against COVID-19, the Philippines has now recorded a total of 26,127,502 vaccine doses as of August 11, 2021, with more than 12 million Filipinos now fully vaccinated.

Presidential Spokesperson Secretary Harry Roque Jr. announced this vaccination milestone in a press briefing today, August 12, 2021, where he thanked everyone for the increased vaccine confidence.

Sec. Roque mentioned about the arrival last night of 813,150 doses of the Pfizer vaccine that the government procured, and the 100, 000 of the Hayat-Vax vaccine that also arrived yesterday, which is a donation of the United Arab Emirates government.

In the same press briefing, Quezon City Mayor Joy Belmonte reported that as of August 11, 2021, the city government has vaccinated 1,191,251 or 70.07 percent of its target population with a first dose, and 649,682 or 40.44 percent of its target eligible population with a second dose. Adding the number of individuals vaccinated with the Johnson & Johnsonâs Janssen COVID-19 single dose, Mayor Belmonte said the total number of fully vaccinated individuals in Quezon City is now at 742,974.

Such vaccination milestones were achieved with the help of some of the city governmentâs initiatives, said Mayor Belmonte, which include home service vaccination for bedridden residents, drive-thru vaccinations, all day and all night vaccination, vaccine rollout for those who missed their second dose, and partnerships with homeowners associations.

Meanwhile, Caloocan City Mayor Oscar Malapitan reported that the city has now administered a total of 938,503 vaccines, of which 596,612 individuals have received a first dose of a COVID-19 vaccine and 341,891 individuals are now fully vaccinated.

Mayor Malapitan said their vaccination in Caloocan is spread in 26 vaccination sites composed of malls, schools, and barangay covered courts. Malapitan has noted as well that from some 6,000 vaccinees in average in the first few months of their vaccination program, the city government has recorded an increase of 15,000 to 18,000 daily average of vaccinees.

On another story, Sec. Roque announced the approval of President Rodrigo Roa Duterte on the grant of a World Teacherâs Day Incentive of P1,000 per teacher of the Department of Education in September, at a total cost of P910-M.