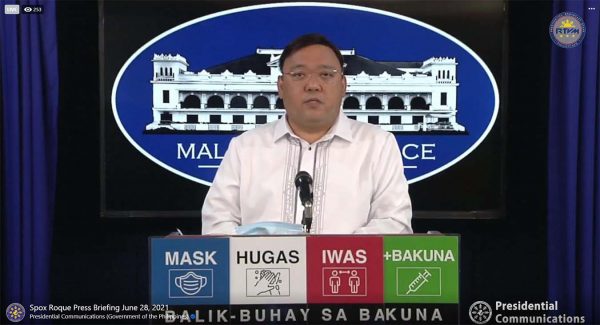 The Philippines has reached the 10 million mark in terms of the number of vaccines administered, with 10,065,414 total doses administered as of June 27, 2021, according to data from the National Vaccination Operations Center (NVOC).

To highlight the said milestone in the countryâs national vaccination program, a ceremonial vaccination was held today, June 28, 2021 in the City of Valenzuela, said Presidential Spokesperson Secretary Harry Roque Jr in his press briefing today.

The Palace spokesman also mentioned about the arrival of the first batch of Moderna vaccines yesterday, June 27. Roque said that of the 249,600 doses of Moderna that arrived, 150,000 were procured by the national government, while the remaining 99,600 doses were bought by the private sector.

Meanwhile, Philippine Ambassador to Canada Rodolfo Robles, in an interview with Sec. Roque, said that the Philippines has expressed interest to get some of Canadaâs excess COVID-19 vaccines.

Amb. Robles also discussed the possibility of having a local manufacturing of a Canadian vaccine here in the Philippines, saying that they are just waiting for the approval of the non-disclosure agreement by the Philippine government before formal negotiations start.

On another matter, Makati City Mayor Abby Binay asked for understanding from the public on the issue of an individual not being vaccinated due to an error on the part of the volunteer nurse vaccinator. Mayor Binay said the matter was immediately acted upon and the person was given the vaccine the following day. Makati Cityâs chief executive also assured that such incidents will not happen again.

Also in the same press briefing, Sec. Roque expressed President Rodrigo Roa Duterteâs decision on the matter of the deferment or extension of the Bangsamoro Transition Authority (BTA). âAng Presidente po decided to become neutral and will allow Congress to fully discuss the matter and to decide accordingly respecting plenary powers and wisdom of Congress,â said Sec. Roque.

Sulu Governor Abdusakur M. Tan has raised his opposition on the extension of the BTA saying that the law provides for the term of the BTA to be only for three years.

Meanwhile, Ahod âAl-haj Muradâ B. Ebrahim, BTA Interim Chief Minister (ICM) said that they have been requesting for the extension because they believe that three years is a very short time to restructure the Bangsamoro government, and because of the delay in the budget of the Bangsamoro Autonomous Region in Muslim Mindanao (BARRM), which he said was given to them only in 2020. ### OPS-PCOO