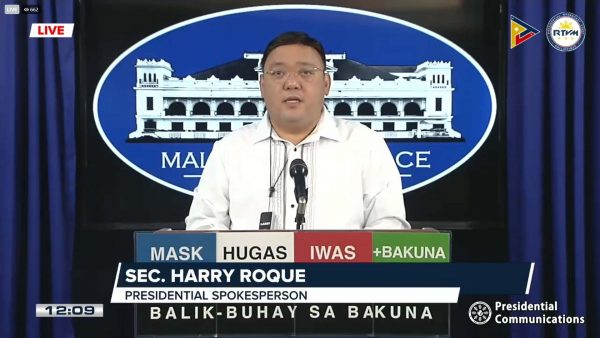 The Palace affirms that the emergency negotiated procurement that happened in the first few months of the pandemic is consistent with existing laws.

Presidential Spokesperson Secretary Harry Roque Jr., in a press briefing on September 1, 2021, reiterated that âthe process of emergency procurement is consistent with our existing laws such as RA 9184 and relevant Government Procurement Policy Board (GPPB) issuances and other further support of RA 11469 or Bayanihan [to Heal as One] Act.â

Secretary Roque explained that RA 11469 gave the President the power to undertake procurement of supplies needed to respond to the pandemic such as personal protective equipment (PPE), in the most expeditious manner. The Presidentâs spokesperson further emphasized the Chief Executiveâs statement on the need to quickly address the need for supplies at the time when the whole world is doing the same, in order to protect the people.

National Task Force Against COVID-19 (NTF) Deputy Chief Implementer Secretary Vivencio “Vince” Dizon added that the Presidentâs marching order at that time is to use the whole-of-government approach, tapping even the private sector to hasten the procurement and source out the much-needed supplies and equipment needed for the pandemic response.

Roque noted that RA 9184 or the Government Procurement Reform Act states the situations when emergency negotiated procurement is allowed, which include emergency cases such as in times of imminent danger to life or property during a state of calamity.

On the other hand, NTF Chief Implementer Secretary Carlito Galvez Jr. pointed out that people should also look at the context on why the emergency procurement happened. Secretary Galvez also emphasized that the PPEs procured by the current government are not expensive as hospitals at that time have expressed that PPEs that they acquire cost around P2,500. Sec. Galvez likewise mentioned that during that time, the supplier who got the contract was the only one who qualified and has the capacity to deliver the PPEs in 1 to 2 weeks only.

Meanwhile, on the status of vaccine deliveries and vaccination, Sec. Roque said that a total of 33, 706, 295 vaccine doses have been administered nationwide as of August 31, 2021, per data from the National COVID-19 Vaccination Dashboard.

Roque, who is Inter-Agency Task Force spokesperson, also mentioned the expected delivery of 703, 170 doses of the Pfizer vaccine, and the arrival of 15,000 doses of Sputnik V Component II vaccines and three million doses of Sinovac vaccines yesterday, August 31, 2021.

In the same press briefing, Dr. Edsel Salvana mentioned data from China which showed that Sinovac is 77 percent efficacious against pneumonia and 100 percent effective against severe illness. Dr. Salavana said that from the said data, among those who had full vaccination of the Sinovac vaccine and got sick with the Delta variant of COVID-19, none developed severe pneumonia. ### OPS